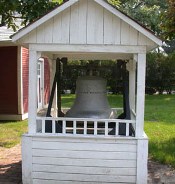 This bell rang in the steeple of the Baptist Church in Naperville, calling worshippers to Sunday services. The City of Naperville purchased the bell and installed it on top of the downtown Reuss Building. The bell was later moved to the community’s first firehouse on Jefferson Avenue, where it signaled emergencies and warned young people of the town’s 9 p.m. curfew.

This historic bell from Naperville’s Baptist Church was cast in 1846 by the Mcneely Bell Foundry of West Troy, New York. It was moved to Naper Settlement in 1979.